What would you do if you found out someone living in your building is a serial killer? That is the premise of the new thriller "Neighbors", which opened on Wednesday. While the usual comic book hero would fight against evil, the answer is not so clear cut in this more realistic setting. 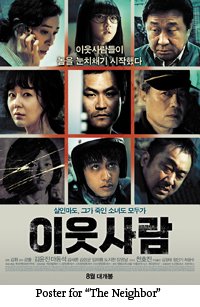 All Neighborsss in the film are reluctant to act due to self-interest. One character does not want the property price to fall after a scandal. Another wants to avoid attention from the police, as he has just five months left before his statute of limitations runs out. Some simply do not want to meddle without evidence, clinging to their daily routines. Meanwhile, the criminal continues to kill.

Just by this story alone, based on Kang Full's eponymous web-based comic book series (referred to as "webtoon" in Korea) the directorial debut by Kim Hwi (screenwriter for "Haeundae", 2009, one of the biggest hits in the Korean box office, among others) should find enough audience.

The cast members are excellent across the board, and the set design successfully brings the cartoony ambiance to life. There is no doubt that Kim has a firm grasp of storytelling, acting, lighting, camera angles and pace.

The only problem is his occasional oversight in criminology, which puts the whole film's seriousness at risk.

The most obvious mistake happens when the killer (Kim Sung-kyun from "Nameless Gangster" 2011) successfully covers up a bloody murder scene in the apartment's main hallway by breaking a single bottle of red wine. Is it not obvious that the amount of fluid on the floor far surpasses 1.5 liters? The director's choice is odd, given that this particular murder happens in a completely different, more "sensible" setting in the webtoon.

That is not to say that the online comic book series is flawless. The criminal's past is never mentioned, and there is no information about his crimes prior to the first one seen on screen. Why does he kill on a regular schedule? What are his motives? They are never explained.

Still "Neighbors" pushes its flaws aside thanks to the exceptional cast members.

With his facial expression perfectly suited for the character's amoral killing spree, the evil killer role is another breakthrough performance for Kim Sung-kyun after "Nameless Gangster".

Kim Yunjin, the Korean-American actress best known internationally for her role in "Lost", is another right choice, as the first victim's stepmother trying to overcome her guilt for letting her stepdaughter come home alone. Her vulnerability and subsequent courage come in just the right doses.

It is unclear why the original webtoon's 17-year-old school-girl victims were changed to suit the 12-year-old Kim Sae-ron ("The Man From Nowhere", 2010, alongside Won Bin), but she shows promise of becoming a great actress someday.

"Neighbors" is now in theaters nationwide. Runs for 110 minutes. Rated for 18 and over. Distributed by Lotte Entertainment.

"'Neighbors' weighs price of indifference"
by HanCinema is licensed under a Creative Commons Attribution-Share Alike 3.0 Unported License.
Based on a work from this source