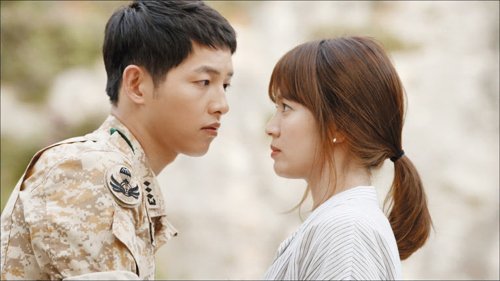 KBS' new series "Descendants of the Sun" has been an immediate hit with ratings of over 20 percent in just three episodes.

It pairs Song Joong-ki, who chose the soap as his first project after his discharge from mandatory military service last year, with Song Hye-kyo.

"Descendants of the Sun" is a love story between a soldier and a doctor dispatched to a fictional war-torn, disaster-stricken country called Uruk.

Song Joong-ki plays the captain of a Special Warfare Command unit, and he is everything a woman could ask for -- playful and mischievous, he also becomes protective and trustworthy in need, not to mention that he has a pretty face and a toned body.

Song, who plays the surgeon, is lovely as ever and together they make a dream couple. 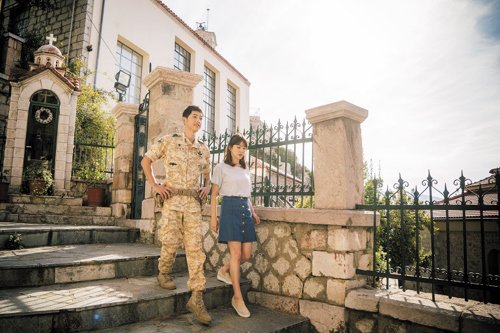 The series is based on Kim Won-seok-II's "Médecins Sans Frontières", which won a storytelling contest in 2011 hosted by the Korea Creative Content Agency, the Chosun Ilbo, and KBS.

Kim Eun-sook, the writer behind such hits as "The Heirs", "Secret Garden", and "A Gentleman's Dignity", joined the writers team to breathe life into the series.

"Descendants of the Sun" is expected to be as popular across Asia as "My Love from the Star". The cast strategically includes a number of popular Korean Wave stars like Onew of K-pop combo SHINee, and Lee Kwang-soo. Yoo Ah-in, another hugely popular actor abroad, will appear towards the end of the series.

In a departure from the norm, the whole series was finished before it went on air, chiefly to ensure that it could be released in China straight away. The producers signed with a Chinese streaming service provider iQIYI.com, which also streamed "My Love from the Star", selling it for over W200 million per episode (US$1=W1,217).

After just three episodes, the series has had over 100 million hits on iQIYI.

"'Descendants of the Sun' Captures Korean, Chinese Viewers"
by HanCinema is licensed under a Creative Commons Attribution-Share Alike 3.0 Unported License.
Based on a work from this source