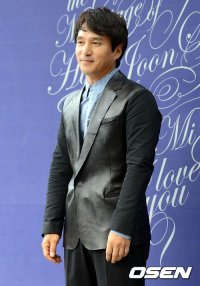 Film star Cho Jae-hyun has come back to the stage three years after he starred in Peter Shaffer's "Equus".

The 41-year-old actor best known for his roles in director Kim Ki-duk's "Bad Guy" (2001) plays an irresponsible father in "Kyungsuk and her Father", which will run through March 25 at the Dongsoong Art Center in Daehangno, Seoul.

In the play, the father leaves home, abandoning his wife and daughter in the middle of the Korean War (1950-53) only to return after the war with a new wife.

Directed by veteran playwright and director Park Keun-hyung, the play premiered last July, and took major theater awards including last year's "Arts Festival of the Year" given by the Arts Council Korea.

"'Bad Guy' star returns to stage"
by HanCinema is licensed under a Creative Commons Attribution-Share Alike 3.0 Unported License.
Based on a work from this source